It’s said that surveying is both an art and science. I particularly enjoy the “art” side of the occupation. Part of our profession involves researching history and having an appreciation for those individuals who came and explored our lands before us, often leaving behind traces and clues of their work for future explorers to find and ponder upon their accomplishments.

Captain John Smith was an English explorer and has been credited with mapping the Chesapeake region with amazing accuracy and detail. His maps are still referenced today. Use the following link to read about the story of Captain Smith and his mapping of the Chesapeake region:  https://www.nps.gov/cajo/learn/smith-maps.htm

It’s one thing to produce a map and then hand it off to someone else to use but it is truly astounding to receive a map produced from many years before and actually find physical features on the ground which represent evidence of where others were, essentially “retracing the steps” of the work they performed.

I was backpacking through the Patapsco Valley State Park and I came upon a stone marker with carvings on it. One side was inscribed “TO THE CROSS HATH BEEN DISCOVERED A.D. 1608” and on the top of the marker was a Maltese Cross. Knowing it was too new to be an original surveyor’s stone, representing an original corner of a land grant or some other indication of a boundary, I wanted to perform some research as to why something manmade such as this was in the middle of the woods so I took some photos of the marker which would help my research.

This is a photo of the Elkridge marker (Blands Content) as I found it January of 2019. 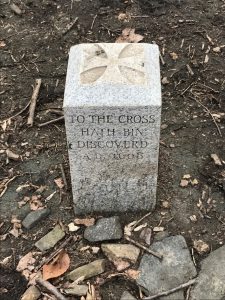 Knowing this was not something found in nature, I performed a search of the internet and lo and behold…the article below popped up.

I hope you enjoy this little bit of local history which tells of a journey performed over 400 years ago that literally took place in our backyard.